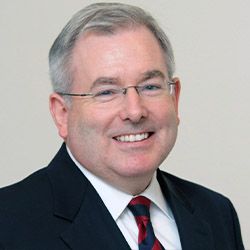 Prof. Dr. Gabriel M. Crean is currently an advisor to the Minister of the Economy of the Grand Duchy of Luxembourg on a range of issues including the data driven economy, the digital transformation of Luxembourg industry, European Digital Innovation Hubs and, the Circular Economy. He was a co-author author of the recently published Luxembourg Government Roadmap for a Competitive and Sustainable Economy.

Prof. Crean is a Luxembourg Government representative and member of the European Union Governing Board of the €7 billion funded EuroHPC Joint Undertaking focused on developing a world-class capability and capacity in both High Performance and Quantum Computing in the European Union. He is also a member of the Governing Board, and the Public Authorities Board, of the European Union ECSEL Joint Undertaking, leveraged a 5 billion budget to address the development of a world-class digital technologies and systems capability in Europe. Prof. Crean is a Luxembourg Government Sherpa on several European Commission – Joint Member States Groups including the joint European Commission – European Member States groups on Digitizing European Industry and Artificial Intelligence.

Professor Dr. Crean is also the Managing Partner of the Lux Consulting Group, which advises Governments, corporations and international organizations on complex issues at the intersection of deep technology, the innovation driven economy and European Union politics.

Prior to moving to Luxembourg, Professor Crean had extensive senior international research and innovation management experience in one of the world’s most innovative public research organisation, the Atomic Energy and Alternatives Energy Commission (CEA) of France. He was the Vice-President for Technology and Director for Europe of CEA-Tech, the Division of Technological Research of the CEA, from 2012 to May 2015. Professor Crean was the Scientific Director (chief scientist) of the Division of Technological Research of CEA from 2009 to 2012.

Prof. Crean has been widely recognised for his work in European policy fora and is an invited Academic Fellow of the European Policy Centre (EPC), one of Europe’s leading think tanks. From 2013 to 2015, he chaired the EPC Taskforce on “European Industrial Policy”.

Professor Crean was globally recognised for his passion to connect scientists from around the world and his engagement to build international networks, when he was elected President of the International Union of Materials Research Societies (IUMRS) from 2007-2009. He received the Silver Medal of the IUMRS in 2019 for his continued service to the community.

Prof. Crean has also encouraged new ways of looking at and stimulating the interface between civil society and science, technology and innovation communities of interest. In recognition of his work, Prof. Crean was elected a Lifetime Fellow of the European Academy of Sciences and Arts in 2011. He received a Doctor Honoris Causa in 2014 from the Wroclaw University of Technology, Poland, for his contribution to promoting European innovation.