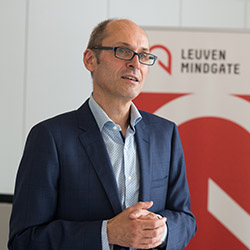 Johan Merlevede holds a master degree in philology and a postgraduate degree in Business Administration. He worked in the ICT industry for 20 years and occupied senior positions in B2B and B2C marketing. He then had a general management and several international positions within Sanoma Learning, driving the international digital transition. When Leuven MindGate was founded in 2016, he became the Managing Director. Leuven MindGate is a joint initiative of different partners of the ecosystem of Leuven and aims to fuel the economic and societal development of the region, with high tech, health and creativity as pillars.

Infrastructure to translate research into business

The region of Leuven is an innovative ecosystem that is successful in translating knowledge into business. Leuven is the location of top research institutes, which have a strong focus on tech transfer. Imec (+ 550 million revenue, world class in nanotechnology), KU Leuven (ranked again by Reuters as most innovate university in Europe), Flanders Make (focussing on the make industry) and VIB (1.500 biotech researchers) are the engines of the innovation ecosystem and create successful spin-offs.

The development of the Vaartkom (Vaartopia project) is important for the further development of the creative industry, one of the pillars of Leuven MindGate, next to health and high tech.
Hertogensite (a living lab for the future of health care) and Leuven Noord are the new projects that will further fuel the birth and development of new companies.

The strength and the uniqueness of the Leuven MindGate ecosystem lies also in the establishment of strong collaboration not only between the triple helix (government, companies, knowledge institutes), but also with the financial sector. The “short lines” between these players and the collaboration, further strengthened by Leuven MindGate, is an important and necessary enabler, also for the infrastructure projects and growing regional development.