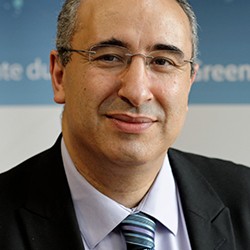 Dr. Nouredine Hadjsaid received PhD and the “Habilitation à Diriger des Recherches” degrees from Grenoble Institute of Technology in 1992 and 1998 respectively.  He is presently a full professor at Grenoble INP/ENSE3 where conducts research at G2ELAB. He is also an invited professor at Virginia Polytechnic Institute & State University (Virginia Tech – USA). His main research interests are in the area of “smartgrids”

He has directed the common academia-industry research center between EDF, Schneider Electric and INPGrenoble (IDEA: Inventer la Distribution Electric de l’Avenir) on smartgrids from 2001 to 2013. He is presently the Deputy Director of G2ELAB, the Director of an ENEDIS chair of excellence on “Smartgrids” and the Chairman of Scientific Council of Think SmartGrids France. He is also the vice-chair of IEEE IGETCC (Intelligent Grid and Emerging Technologies Coordination Committee) and the French representative at International Energy Agency for ISGAN-SIRFN Annex.. He was the general chair of IEEE PowerTech’2013 held in Grenoble-France and IEEE SG4SC (SmartGrids for SmartCities) held in Paris in 2016.

Dr. Hadjsaid has published more 250 scientific papers in international conferences and journals, has author/co-authored and directed 7 books about power and smartgrids.

“Energy transition through smarter grids: from heritage to innovation”

The energy transition opens up new challenges for research on energy, particularly in the electrical field. Key factors such as energy decarbonation, digital energy, energy efficiency targets, and new uses such as the electric vehicle place not only the electrical vector at the center of the energy transition but also highlight the need for multidisciplinary research. It is well known that often innovation is generated from research at the crossroad between disciplines.

In this context, the power grid is a vital infrastructure for facilitating energy transition. It has played a key role in the electrification of modern society and expected to play an even central role for integrating renewable energy sources, electrical vehicles, enabling active participation of end users, and achieving energy efficiency while keeping the grid fundamentals with respect to economy, security and quality of supply. As such, this transition requires an even smarter grid able to achieving the assigned goals without overinvesting on existing assets.

The presentation will deal with some Smartgrids demonstration projects to support energy transition in the Grenoble area. These projects are conducted in a multi-stakeholder environment with actors such as Transmission/Distribution System Operators, manufacturers, IT providers and integrators, academia/research centers, associations, local communities, etc. Through the example of these collaborative and multidisciplinary projects, some breakthrough innovations will be illustrated. As such, specific results covering testing of a variety of innovative solutions ranging from self-healing capability of distribution grids and Voltage VAR Control to smart substation and innovative demand response strategies will be summarized. The presentation will particularly highlights the innovation process that emerge from such real life demo projects while considering the various involved stakeholders from the whole energy chain and the feedback experience from the real implementation of the SmartGrids technologies in Grenoble and Lyon.