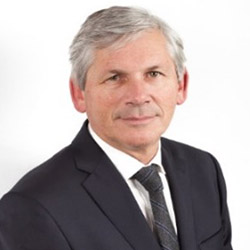 Stéphane Siebert graduated from Ecole Centrale de Paris in 1981. He obtained his PhD in Nuclear Chemistry developing a new process of uranium enrichment by liquid-liquid exchange processes which resulted in a demonstration at pilot scale (a 2 B French Francs investment in 1985).
In 1989, he was a co-founder of CORYS, a spin-off company from CEA. He was deputy director-general for operations until 1995. Corys is today the world leader of power plant and railway dynamic simulation with subsidiaries in America and Asia. During this period Dr. Siebert notably initiated a large number of projects with the EC regarding nuclear power safety in eastern europe providing advanced training tools to Nuclear Power Plants in Russia, Ukraine, Czech Rep, Slovakia, Hungary, Bulgaria for VVER and RBMK reactors. He was responsible for international cooperation projects in UK, India, USA and Egypt, focusing on advanced physical modelling as well as virtual reality.

Dr. Siebert subsequently was headhunted for the post of general manager of Grenoble city services, responsible for 4500 staff. He held this position from 1995 to 2008 where he managed numerous ambitious projects in the field of smart cities. As a result, Grenoble was selected by the EC as one of three Europeean finalists in the innovation capital competition (Icapital, feb 2014). He was also a member of the Board of the GEG Energy company (6th largest French utility). At an international level, Dr. Siebert launched the international forum of sustainable cities held in Grenoble every 2 years. He also engaged in several european cooperations in the fields of architecture and urban planning with partners in Scandinavia, Germany and Austria.

In 2013 Dr. Siebert became Director for strategic projects and since 2016 CEO of the Technological Research Division at CEA (CEA Tech). CEA Tech is a recognised world leader in semi-conductor, digital and renewable energy technologies across several sectors (automotive, aero, space, defence, manufacturing industry, energy, building and bank applications). In addition, CEA Tech is active in approximately 220 european projects per year and, has R&D technology partnerships with 11 of the world top 50 largest companies, including key technologies delivery to the most demanding ones.

In his capacity of CEO of CEATech, Dr. Siebert is in charge of conducting CEA Innovation strategy, responsible for tech transfer, start-ups creation and partnerships with companies, with proven results.